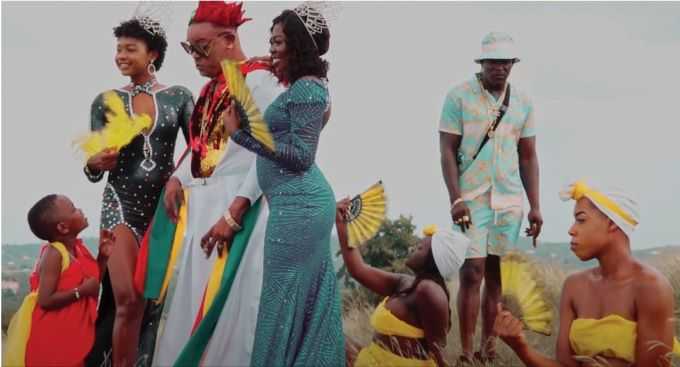 COVID-19 slowed down the music and artistry that would normally flow from entertainers during the annual Carnival Festivities.  That challenge resulted in an endless season of music and other forms of entertainment as creators responded enthusiastically.

The local music industry has enjoyed regular releases spanning various genres and appealing to musical preferences beyond the usual sphere.

Into this entertaining potpourri comes MnM Music Group under the leadership of reigning Soca Monarch Dennis ‘Menace XL’ Roberts alongside Brukway Productions and Colour Colour whose ‘Color Color’ was an instant local hit.

By now we are all familiar with the MnM Music Group’s penchant for finding diamonds and creating stars. Their flagship annual event, Country Fest, has churned out finalists for Carnival events at the Senior and Junior levels.

The most recent find by Menace and his team expands the brand beyond Carnival.  The team partnered with Antiguan celebrity, Randy ‘Colour Colour’ Simon to layered his already entertaining personality with music. The production garnered immediate, broad based interest and attracted the attention of popular influencers outside the music world.

The song ‘Color Color’ written by Dennis Roberts and a music video were released earlier this month to rave reviews.  Colour Colour’s signature cough and hook line feature prominently in the hit song.

Within five days of its release, the Color Color YouTube video received almost 10,000 views and scores of comments.

While most of his fans describe him as a dancehall artist, Colour Colour describes his style as versatile as it moves across several genres. He added that the blend of his flamboyant style and signature song penned by Menace provides the ideal platform for moving his brand to major international entertainment networks.  He continued that his “trendsetting, yet humble-hype” has positioned to advance to the next level and ‘Colour Color time’.

The reviews of his new song have largely been positive. His fans span all age groups and genders.

Architect and Social Media influencer Colin John Jenkins said in his review, “Let me tell you, the only thing more colourful than Colour Colour is a full bag of Skittles. When pardna jumped off the horse, gussy up in his regalia and said, ‘Son, one day all this will be yours, everything colour touches is yours,’ I died!”

Another music producer and influencer, Vaughn Skerrit, said, “The song is way better than I thought and I don’t like it that halfway through I’m doing the stupid cough as it comes up in the chorus. It’s embarrassing when you catch yourself singing along. Bex that I loved it and found it incredibly catchy!”

The video, which is saturated with distinctive elements of Antigua and Barbuda, has a definite international appeal and seems poised for a larger audience.

It is available on all music platforms for purchase. The video can be found https://www.youtube.com/watch?v=RzDj2xSDZTI

Colour Colour’s first performance will come at the 4th edition of Country Fest ‘Back to Our Roots’ on 26th December 2020.