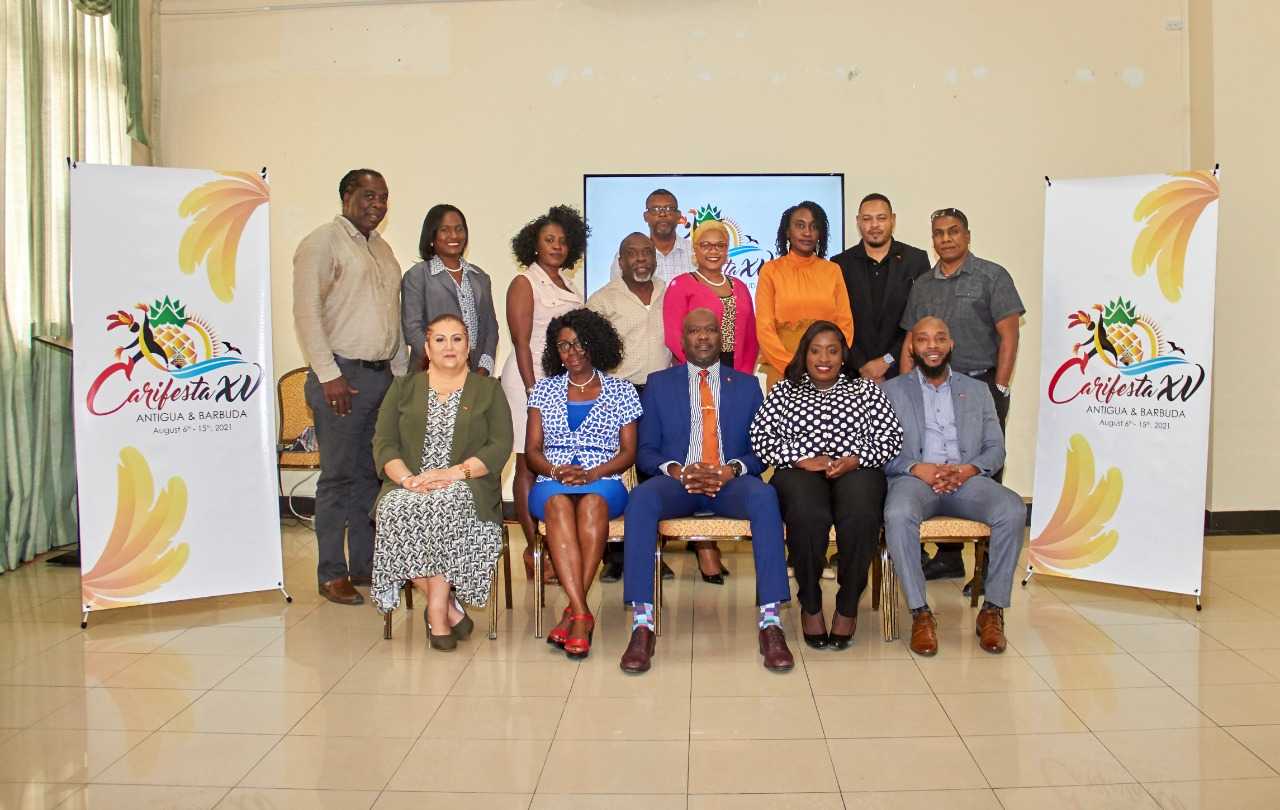 CARIFESTA 2021 back on board with new board, subcommittees

Antigua and Barbuda has announced the revival of its CARIFESTA 2021 with the official installment of a management committee and board comprising a cross section of the island’s resources, all coming together to realize the EC$12.5 million undertaking.

Set to take place between August 6 – 15, 2021, CARIFESTA 2021, will be staged on the heels of Carnival and before the island’s 40th Independence celebration – a point newly appointed Deputy Director of CARIFESTA 2021, Michael Freeland expects all Antiguans and Barbudans to recognize and invest in.

“This event means 18 months of planning; proper execution and showing the world that we can execute an energetic rhythmatic and positive output of our culture for all to see,” Freeland said at a press conference on Tuesday organized to introduce the new CARIFESTA 2021 structure and its principals.

Darryl Matthew, Minister of Sports, Culture, National Festival and the Arts said the 2021 staging of the Caribbean’s foremost cultural gathering will be one Antigua and Barbuda intends to capitalize on, particularly from the angle of climate change and the environment.

To cement this, Minister Matthew underlined the presence of the Environment Division as one of the key inclusions in the board of directors set up to spearhead the 2021 undertaking.

“I would like to thank the team of persons in the CARIFESTA unit that were working along with Director Walter for their contribution to date and for continuing to hold the fort while we made this very important transition. Without their contribution [and] continued willingness to serve Antigua and Barbuda, thigs would be in disarray,” Matthew said.

While the minister will himself chair the committee leading the undertaking, with Senator Shenella Govia as his deputy; the charge will be in the hands of Director of Culture Annette Aflac as CARIFESTA Director and former Senator Michael Freeland. Freeland is a former Senator who is also senior officer at the Department of Youth Affairs.

“It is indeed a pleasure for me to be asked to serve in this capacity. I am rather humbled to take culture to its highest level to showcase Antigua and Barbuda’s culture to the Caribbean, the region and the world. I look forward to everyone’s support in every which way you can to ensure that we look good overall,” Aflac said.

The CARIFESTA board will include representatives from several state and statutory organizations including the Ministries of Tourism, Foreign Affairs, Health, and Culture; along with those from the Festivals Office, the Director of CARIFESTA, Environment Division, the Cultural Division, Immigration Department, Police and the legal department.

These board of directors will oversee a number of subcommittees which will be established and announced in the not too distant future. These will include a marketing subcommittee, protocol, logistics, security, events planning and programing, hospitality, health and safety, volunteers, cultural expression, finance and transport.

“It was important for us to ensure that all areas of event management and event hosting are covered by the different subcommittees. And the persons sitting on those sub committees will not necessarily be persons that are a part of the government sector, but any person within Antigua and Barbuda who has the expertise in a particular area,” Minister Matthew said.

CARIFESTA 2021 will be staged at a series of venues across the country, with Minister Matthew assuring that the main stage for cultural performances – Deluxe cinema building – will be ready in time for the event.

The renovations, he said, are expected to commence this year with “drawings and concept” having already been received and reviewed. The process of fundraising is currently underway.

The controversial acquisition of the Deluxe facility, is to be one of the main pillars of the 2021 staging.