Brexit: ‘Deal to be done’ as UK-EU trade talks resume 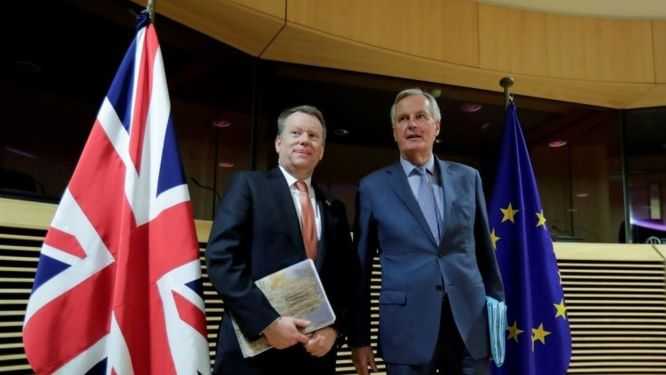 There is “still a deal to be done” between the UK and EU on post-Brexit trade, a minister has told the BBC ahead of talks resuming later, but Environment Secretary George Eustice said “sticking points” on fishing and business rules remained.

UK chief negotiator Lord Frost is in Brussels for the talks, with the deadline for a deal approaching.

Ireland’s foreign minister has said it is “in everybody’s interest” to reach an agreement.

One of the disagreements is over access to UK waters by the EU’s fishing fleets – an issue which erupted last week, with the UK accusing the EU of making extra “last-minute” demands.

Another is what measures there should be to ensure a “level playing field” for businesses on both sides.

If a deal is not reached, border checks and taxes will be introduced for goods travelling between the UK and the EU at the end of the year.

The EU wants this deal. A no-deal scenario would be costly for EU businesses – a nightmare for European fishing communities, largely dependent on access to UK waters, however, during this last-minute negotiating push, EU governments say they’re mindful not to sign up to a deal in a panicked rush.

If push comes to shove, they say, they prefer the short-term pain of no deal, in order to protect their longer-term interests: not exposing their businesses to what they view as unfair competition in their own single market.