A showdown is set to take place when a resolution is introduced at the next sitting of Parliament to address the Barbuda’s Council’s request to secede from Antigua. The government is taking the unprecedented step of presenting the matter to the Parliament after it received a letter from the Barbuda Council requesting that discussions commence on the separation of Antigua from Barbuda. In the letter dated 31st August, 2020, Council
Secretary, Paul Nedd, informed Cabinet Secretary, Konata Lee, that the Council wished to secede from Antigua in order to determine a separate future for Barbuda and its people.

The letter continued that this move had become necessary as a result of the Gaston  Browne administration’s neglect of the Barbudan people which only intensified after the
passage of Hurricane Irma in 2017. Adding that the Council had no choice but to expose the mistreatment the Barbudan people have been subjected to, Nedd went on to cite the Barbuda Land Act of 2007, the declaration by the prime minister that Barbudans are ‘squatters’ along with the ‘derogatory name calling’ of Barbudans by the head of  government as justification for the Council’s move. Nedd said these and other incidents  created a strain on the failing relationship between Antigua and Barbuda. He further expressed the view that Barbuda was being used as a bread basket for Antigua, which is
evidenced by the use and abuse of the island’s resources without benefit to their people. 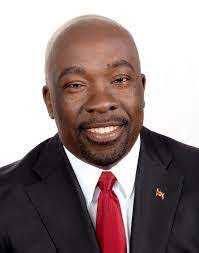 The contentious issue will be introduced in the Lower House, by way of a resolution next Thursday. Information Minister,
Melford Nicholas, said the matter is not one from which the government will shy away. “For Antigua and Barbuda to consider at this stage the giveaway of one third of its  resources and to let it walk away is incomprehensible, it’s unthinkable. So at this time the government’s position will be
well laid out in our presentations. The resolution would likely be a negative resolution but nonetheless everyone will have a
chance to have their say,” he remarked.

Nicholas told  reporters that Barbuda is important to the country as a whole and there are no plans to change that. “The resources that are on Barbuda get into the national economic mix so that we can build infrastructure and provide services throughout the country. The almost religious fervor by which Barbudans associate with questions of the land is something that we note, but we are not going to be afraid of it. It is a matter of law that the lands on Barbuda are vested in the crown; it’s incontestable and we are going to go forward on that basis,” Nicholas  declared. The minister acknowledged that the tone of the discussions between the islands could be improved and he expressed the hope that this would be one of the  outcomes of  the debate.