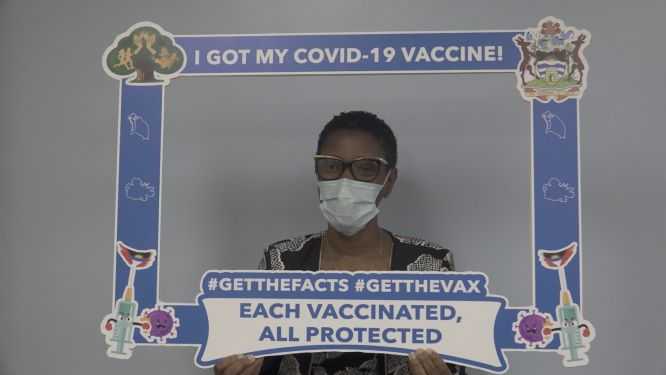 Approximately 60 health workers took the first doses of the Oxford/Astrazeneca vaccine on Wednesday at Mount St. John’s Medical Centre and that number is expected to significantly increase by the end of the week.

Chief Medical Officer, Dr. Rhonda Sealey-Thomas was the first public official to be inoculated at the launch of the vaccination programme that was broadcasted live, followed by Margaret Smith, Principal Nursing Officer.

This is the first batch of the Astrazeneca Vaccine that contained 5,000 doses, which arrived from Dominica last week.

The Chief Medical Officer spoke to reporters after receiving the jab at MSJMC.

In the next 12 weeks, Dr. Rhonda Sealey-Thomas explained the second doses will be administered, a decision taken by the Technical Working Group which she chairs.

She downplayed the fact that being first to take the vaccine is historic, choosing instead to view it as setting an example for others to follow.

Dr. Sealey-Thomas expressed appreciation to the Government of Dominica for providing the first set of Oxford/Astrazeneca Vaccines and thanked the healthcare workers responsible for planning and executing the programme. The message from everyone that spoke on Wednesday morning was clear, it is important for healthcare workers to get vaccinated.

More photos of other health workers getting vaccinated below: