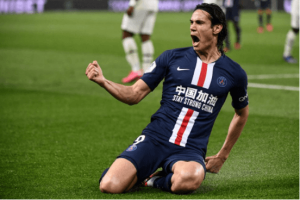 Former Paris St. Germain striker, Edison Cavani, is due to join Manchester United. The Uruguay international, 33, has been in talks with United and it appears likely that Cavani will join on what could be a two-year contract. Cavani is out of contract having left Paris St. Germain at the end of June. While he left PSG under a cloud following a disagreement with Neymar, he feels he has more to give to European football. United have been given a positive impression about the player’s desire to play for the club and, should face to face talks confirm the impression, a deal will be done. United feel Cavani’s age is not an issue and his experience will help develop the younger players in Ole Gunnar Solskjaer’s squad.

Cavani scored 341 goals in 556 club games. Included in that are a club record of 200 goals
in 301 appearances for PSG. He also scored 50 goals in 116 internationals for Uruguay.
If the deal does go through, one of Cavani’s first games could be against PSG who are
United’s opponents in the first Champions League group game at the Parc de Princes on
20 October.